As a philatelist, it is a joy to collect and study stamps depicting colourful themes. When the themes are foreign, it is even more interesting. Every year, postal departments of different nations work together to release ‘joint issues’. Every joint issue of stamps brings in a native theme and an exotic theme (foreign theme) into our preview of collection.

One of the most important joint issues of 2009 was that of India and Philippines. This was to celebrate 60 years of bilateral relationship. I was only surprised about the theme chosen for the issue: marine ecology. In the world of marine ecology, the proponents proposed marine mammals as their stamp motifs. India took Gangetic Dolphin as the motif and Philippines took Butanding. 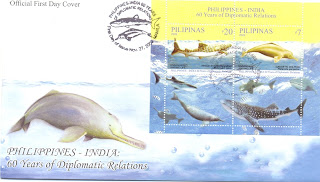 Gangetic Dolphins are the most elusive of all marine mammals. They are as shy and ‘murky’ as their living habitat too are murky. Hence, photo identification of these creatures has become impossible. Still, marine biologists have learnt many of their secrets. They are blind. And they are good swimmers. Scientists believe that these beautiful creatures lost the efficacy of their eyes, as they were never used in the muddy waters of Indus and Ganges for millions of years. Still they ‘see’ their world through echolocation and sense their surroundings through the physical touch using their flippers. Known as ‘fresh water tigers’ the Gangetic Dolphins are the most important marine mammals as their presence indicate the goodness of the freshwater marine ecology. Today, as they are fighting for their survival, we cannot say for sure if they will be with us for long. However, one thing is sure, as one among the only four varieties of fresh water dolphins found in the world, they would always symbolize the great and diversified marine heritage that our nation has embraced. Gangetic Dolphin has been declared the National Marine Mammal and is a protected. 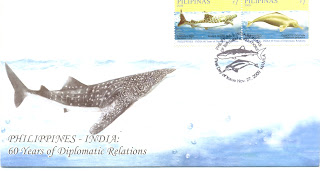 Butanding are whale sharks that live in the archipelago of Philippines. Called the Gentle Giant of the Deep, Butanding are the largest living fish species. Probably, due to its size, it is a slow swimmer. They swim at a speed of only 5 Km per hour. Large population of this endangered species of sharks are seen in the Sorsogon province of Philippines. Divers and snorkelers swim beside these giants of the sea without any fear of being attacked. As the largest living fish, Butanding have captivated sailors and seafarers from time immemorial. It is graceful to watch these giants of the sea roll and blow from its tail fin. To sight these sharks and to film them, thousands of tourists flock on to a small island called Donsol in Sorsogon. Donsol has become an internationally repute ecotourism destination. But, like their relatives around the world, Butanding too has become endangered. 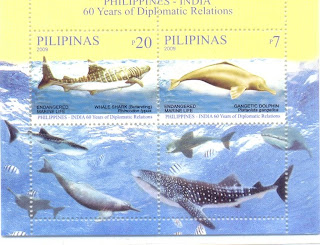 Life began in water. Seeing, understanding and appreciating the habitat of these wonderful sea creatures humbles us to a realisation that we are only co-owners of this immense God-made universe.
****
India-Philippines and Philippines-India First Day Covers and Stamps from personal collection.
****
Posted by just as I am at 9:48 PM No comments: