Extensive sand banks and the romantic backwaters set the stage for another story. This is the story of the Turtle Beach of Malabar. Lovingly called ‘Kolavipalam’, this is the beach where the giant turtles of the oceans swim ashore every year to lay their eggs.

Not far away from my hometown, Kolavipalam beach is historic as the heart of Malabar Coast. Nestling in the warm breeze of the sea wind, Kolavipalam Beach is near the isle on the mouth of Kotta River. My little WARGON-R took me to this place after some carful zigzag driving through a narrow road with threatening coconut trees all around. Threatening?.....

Ya, in Kerala, there is a belief that the Coconuts will never cheat anyone. Yet it is menacing to drive through unkempt coconut groves as dry coconuts can land on the car from sky! Good to my beliefs, I had a smooth drive to Kolavipalam.

The place is unique in many ways. Years ago, at Kolavipalam, a pioneering effort was lounged by the local community to conserve a unique identity of their beach: as the only nesting grounds of Olive Ridley Turtles in the western coast of Indian Ocean.

Since million years, the Olive Ridley Turtles home in here. Now this has become an identity the locals richly cherish. With governmental help, they have set up a simple and small Olive Ridley Turtle conservation post.
Every year, in flood-lit-moon, from September to March, thousands of giant turtles will creep on to the beaches of this isle.  ‘Arribada’ is the name of this ritual (a Spanish word meaning ‘the grand arrival’).

For sure, we will never know why the Ridleys choose Kolavipalam. However, for sure, swimming thousands of kilometres from the warm waters of the Eastern Pacific and the Indian Ocean, these turtles will never miss their Kolavipalam beach. Precisely they will swim on to this beach...hurriedly they will lay their eggs and swim back to oceans to live a 100 years!  Fidelity to this beach is a strange feature of Olive Ridley. And we'll never comprehend why. 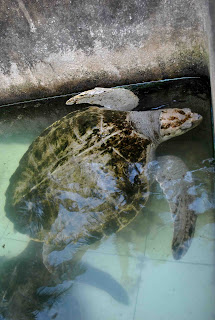 I have seen many photographs of Oliver Ridley’s natal story. I am a little shy to ‘click’ them myself. After all, will it be like peeping into the labour-ward of a modern hospital? As these turtles reach their natal beaches of Kolavipalam, I like to give them all the privacy and respect that they deserve on their ground.

I have often tried to find where we stand in the creation story. Oliver Ridley turtles are one of the oldest tenants of the earth. They lived along our long lost Dinosaurs. They live with us even now. Everyone say we reached earth last. On occupying it, some of us have enhanced its glory while the others have diminished it. Yet, through all this, there are places, which were handed over to us from generation to generation as a heritage of God’s creation. Kolavipalam beach is one of them.  As I sat on the clean ivory-coloured sands of Kolavipalam, lots to thoughts ran across me.

One thing for sure is that, like the grand Oliver Ridley Turtles, I too have discovered a beach that I will hold dear to my heart and where I will lay some of my dreams by the moon light!

I love to scribble more about the story of the Turtle Beach....
Posted by just as I am at 9:05 PM 2 comments: