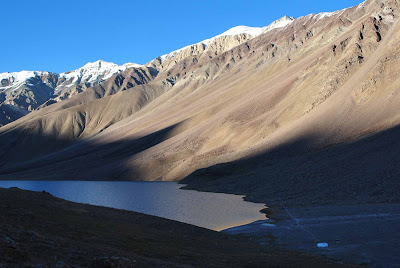 A lake always gives me a feeling of serenity. Nevertheless, I never knew that lakes are indicators of ecological health. Scientists also say that lakes are excellent sensors of environmental changes. Himalayan lakes have always been of interest to men for their ecology, splendour and remoteness. Unlike other mountain ranges, Himalayas has ‘hidden’ all her lakes in the loftiest places on earth. May be she wants to keep them away from pollution and unwanted visitors. 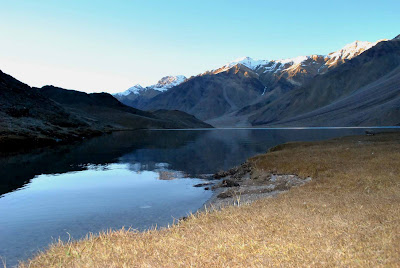 The most classically beautiful Himalayan Lake is the Chandratal in Lahaul-Spiti district of Himachal Pradesh. Reaching here from Hampta, at 4350m, I was absolutely enticed by its surroundings.  Nuzzling in the lap of Mighty Himalayas, Chandratal has been sleeping for a million years! (No one is allowed to wake her up! The government has banned all sorts of human activity in the vicinity of the lake. No one is allowed to use automobiles and drive to this lake. Camping is prohibited. Dropping any sweatshirts or food in the lakeshore is a sin. One has to hike 5 km. to reach Chandratal. A lone billboard posted by the Ministry of Environment and Forest clearly tells us that this lake is of international importance.) Scientists believe that the lake was formed at the end of the last ice age when the glaciers retreated, leaving behind considerable dead ice masses. These ice masses melted forming the large deep blue lake.
Deep in the mountains, towering snow-capped peaks surround them. Absolutely pollution free, these lakes offer a sanitized ecosystem unimaginable to a city dweller like me. No postcards, no photographs, no paintings nor pictures can draw us close to the real life and the heartbeat of these lakes. One has to go to them... sit with them and listen to them.  No wonder, these lakes have inspired and attracted travellers, pilgrims, painters and a whole generation of nature lovers. 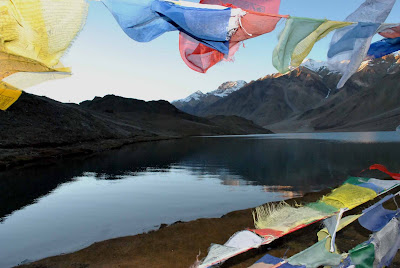 Chandratal is holy to both Hindus and Buddhists alike. People show great respect to her.  Hence, our trek guide Mr. Sharma told me that no one has measured the depth of the lake.The circumference of the lake is around        2.5 km. and the water is crystal-clear. 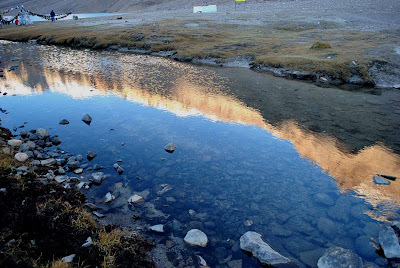 The river Chandra takes birth from this lake as it drains out. The draining water is so clear that the surrounding environment comes alive in the reflections.  It is absolutely breathtaking and mystical to see so much of reflections around!  Except for our team of trekkers, there wasn’t a single soul out there. In those empty surroundings, the grand lake and its backdrop cast a spell on all her visitors.

It is a sheer magic to spend moments here at Chandratal.
I stood still... then I knelt...
I lowered my water bottle
and felt the surge of chill clear mountain water rushing into it.
I kept the bottle aside and prayed…
trying to listen to God in the absolute sound of silence. 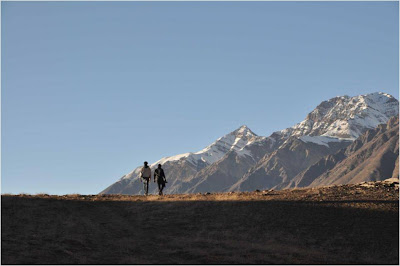 Walking back from Chandratal, we had nothing to tell one another.
We just kept walking…
In life, I believe that is the best we can do…
to keep walking.
***
Photo location: Chandratal Wetland and Lake
Photos shot in Hampta Trek
Posted by just as I am at 7:31 AM 1 comment: