The most carefully crafted warning that I have ever read in the beginning of any book is this:

Written by Mark Twain in the opening pages of Huckleberry Finn.
***
Posted by just as I am at 8:35 PM No comments: 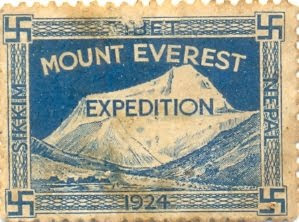 Sometime ago I did this unusual thing: I bought a fabulous and small piece of story from the 1924 Mount Everest Expedition. Philatelists lovingly call it the “1924 Mount Everest Stamp”. But strange enough, it is not a stamp at all. It is a label... and is classified "rare, valuable and a beutiful piece of philatelic history".

Before the British expedition to Everest in 1921, no European had ever even reached the base of this magnificent mountain, let alone explored its heights. The only European who had ever succeeded in getting anywhere near the Everest was a young British officer named John Noel. He was very dynamic and had climbed Alpine as a boy. While in India, he passionately spent days exploring the foothills of Himalaya. The beauty, majesty and heights of this mountain intrigued him for further exploration. He just couldn’t keep away from it. That was the beginning of the Himalayan exploration story. After the World War I, Cap. Noel was one of the nine men chosen for the first expedition to Everest. This expedition reached 18,000 ft. at a critical ridge called North Col. From then on, they were forced to abandon the ascent as it was impossible to negotiate the sheer ice-walls at those heights.

In 1922, Cap. Noel again made the second attempt. That team consisted of more experienced climbers. The 1922 mission was more of a reconnaissance mission than an all-out assault on the mountain. But this time the first ascent team reached 26,700 ft. and the second team reached 27,230 ft. It is said that the wind was so fierce that the climbers could hardly stand upright, testing the ultimate human endurance.

One of the most celebrated attempts to ascent Mount Everest was made in 1924. Cap.Noel was a member in this team too. More than an ordinary climber, he was the official photographer and the movie camera operator of the group. Noel was passionate to film the entire ascent. He wanted to produce a movie on the 1924 expedition. Hence, he formed a private company that paid for the rights of the Everest expedition. He even innovated a specially adapted movie camera, a 35mm Newman Sinclair, to film the historic ascent of the peak! 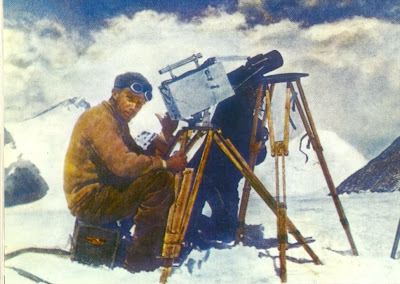 To fund the 1924 ascent of Mount Everest, Cap. Noel had another novel plan. He produced a special label. These labels were carried to the Base Camp below Rongbuk Glacier. From the Base Camp, they were stuck on special cards and autographed. Using mail-runners, these cards were brought back to British administered India. Then they were sold by the Cap. Noel’s company to raise additional money for the expedition.

This rare label is categorized under “British India stamps” though Mt. Everest is in Nepal. The reason it’s categorized under British India is that, at Base Camp an Indian stamp was added and the thousands of cards were dispatched to “orderers”. This money was very important for Cap.Noel to achieve his dream of capturing the golden moments of 1924 ascent of Mount Everest. Interesting feature of this label design is the Swastikas in the four corners. We do not know why Swastikas were used in the corners. May be because it is a good-luck symbol in India. Even Buddhism and Jainism too has adopted Swastikas as a good sign. So, did Cap.Noel believe in eastern symbols? Or there a Finnish connection to the design of these labels? The Finnish Airforce used blue Swastika (the ancient symbol of good luck) as their insignia from 1918 onwards. In 1945 it was forced to be abandoned due to an Allied Control Commission decree (association to Nazism). Swastika was used also as a watermark on Finnish stamps in the 1920’s.

Perhaps, as the famed 1924 Himalayan climber George Leigh Mallory (who lost his life in that fateful attempt) once remarked, men climb mountains simply, “because they are there.” The story of 1924 Mount Everest Expedition is never complete without the mention of this serious remark.

If the will to meet and master a significant adversary is as old as man himself, then this little “stamp” is a living tribute to a great story that is frozen in time. I proudly owe it!
***
Photo of Cap. John Noel from Marshell Cavendish Encyclopedia of Discovery and Exploration.
Picture of the "1924 Mount Everest Stamp" :a scan from my stamp collection.
***
Posted by just as I am at 9:02 AM 1 comment:

My life with a broken silence... 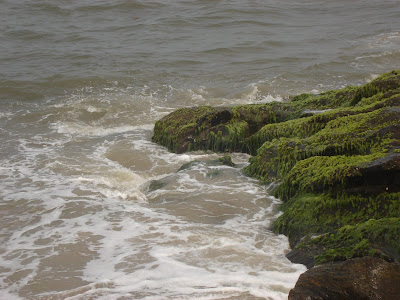 To be silent is to remain without any communication at the deepest level of oneself. That exercise is very difficult. Silence often echoes into sounds that flutter across the minds and the waves in air. Often, the modern society is so cacophonous that there aren’t any empty rooms where silence can adorn. The principal culprit for this is the advertisement industry that has over driven and arrested every form of sensible communication prevalent in a society.
Previously I would carry a small storybook or a book of verse as I am waiting for my friend’s arrival at the railway station. Today I cannot do it. That slice of silence is all stolen from me by the jarring meaningless advertisements that fill the station air. It is sad that the whole of railway industry is littered with advertisements: not only the railway station, but also the railway-tickets, the railway-cars and the railway -tracks.
A stroll across the street will tell different things to different people: Wear me, Call me, Hear me, Drink me, Eat me, Drive me, Live in me, Live with me...and the list goes on and on. As companies and brands scramble for the empty city spaces for putting forth their invitations, they also stamp out the very last fickle of silence.
The trick is that advertisements host some form of daily ‘information’: calendars, journaling stationery, time-charts, weather-charts, health warnings, bookmarks, traffic signs and much more. The advertisements are often posted next to the mandatory billboards. Hence, I cannot circumvent these advertisements to reach the billboards. Looking at it closely, the advertisements have encroached into my daily living at an astonishing rate...it is everywhere! I believe that today’s society would have hoisted an advertisement on every gain of sand in the seashore, if it were possible! What a pity if that had happened!
As I dwell in the centre of the society, has silence any place in daily living? On the other hand, is my life a life of broken silence? Or, is it that, communication can never take place without compromising a little of silence?
***
Posted by just as I am at 7:22 AM No comments: