The Wall and the picture...

My bedroom has a wall. On it hangs ‘the Virgin and Child’.  I am not very conscious about it. Still, everyday this picture tells of its presence. The original drawing was done by Leonardo da Vinci and was drawn in charcoal and white chalk. I got the copy of it from a friend of mine and since that time, it stood on my bedroom wall. 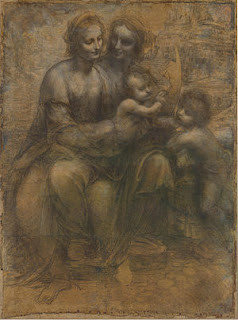 There is something delightful in this picture. Each time I look at it, an inner conversation keeps rolling in:  It tells me about the children, the mother, and a happy home… it tells me about the maternal pride of a young woman and the healthy smiling child in her arms. I think these elements are quintessential in any family. Hence, consciously, or unconsciously, I like this work of art.
The owner of every wall may have a reason for the pictures on their walls. As we exhibit them in public, seldom do we realize how the world looks at it and what the world will find in it. The essence of every wall is to have meaningful pictures.
If the wall I am speaking about is a metaphor of life, then it is more radical to think of the pictures on it. Life chisels different pictures for its wall as we grow up and grow old. The shapes and forms differ. Over the years, many newer pictures appear and older disappear. The wall is sometimes burdened and sometimes lightened. Yet, all of us will have pictures to speak about and pictures to be silent about. If I were to make an examination of my life and evaluate all the pictures those are hanging out there, what will it all look like? What will they all speak to me? Will they speak bitterness or sweetness? Will they cry… or smile?
The wall and the picture stand still.
Posted by just as I am at 8:50 AM No comments:

I was just thinking of my health and way it has travelled with me over all these years. What struck me is the manner in which I should have taken care of it. Often, there were years of niglet and years of overuse.
R. Gopalakrishnan, an Executive Director at Tata Sons has pointed out an interesting element in his book, ‘When the Penny Drops’.  Writing about the importnce of maintaining good health,  he narrates a story. While growing up in Calcutta, Gopalakrishnan was coached at Bengal Lawn Tennis Association. The coach Mr. Dilip Bose , the Indian Davis Cup Tennis star of the 1940s, used to mention the imporatnce of health and compare it to that of keeping a car sound. The metaphore he used was powerfull: “How would you take care of your car if you were told that it would be the only car you would have for your whole life?”
Posted by just as I am at 4:52 AM 1 comment:

Dear Rupert Murdoch,
I agree with you when you said, "They caught us with dirty hands".


After all, the British Members of Parliament (MPs) were exposed by the Daily Telegraph through a series of stolen documents of all the expenses of MPs. Are these the same MPs who were grilling you?
Keep going Old Jack of the Press, keep going!!
Abby
Posted by just as I am at 6:48 AM No comments: 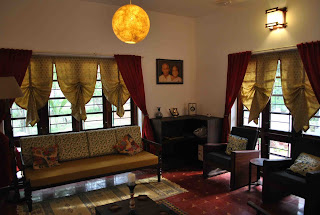 As we celebrated the occasion, we decided  to conclave at the house that Great Grandfather  built. House is in a small quiet  hamlet called Cherukole  at Mavelikara in Kerala.  This grand home  was restored, renovated, and opened for all of us to spend some memorable moments.

“I say that if men lived like men indeed, their houses would be temples – temples which we should hardly dare to injure, and in which it would make us holy to be permitted to live; and there must be a strange unthankfulness for all that          homes have given and parents taught, a strange consciousness that we have been unfaithful to our fathers’ honor, or that our own lives are not such as would make our dwelling sacred to our children, when each man would fain build to himself, and build for the little revolution of his own life only”
(Quoted from the essay,
‘The Lamp of Memory’ by John Ruskin) 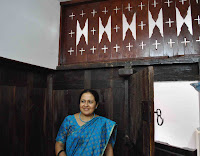 Like every traditional family home, this home too has her wooden cellar.  My sister wanted to be photographed in the cellar. So we crept into the cellar and hurriedly clicked a shot. 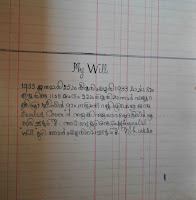 One of the most amazing objects which was noticed in the house was the detailed accounts journal that my Great Grandfather maintained eighty years ago! He was a strict medical doctor with impeccable humane values.  He worked with the British and he kept all his records in straight order. He even wrote his WILL, sealed it safely, and mentioned about its whereabouts in his journal.  I have got lots to learn from my great ancestor.
***

Joys of a home…

It took a long time for me to revisit my Sister. All in a hurry, I travelled to her home last week. My father-in-law’s home at Ayroor is on the way to my Sister’s home. Both these places are similar for the tranquil atmosphere: abundant water, green surroundings and country roads … they offer lots of joy to me. Couple of days in that environment can recharge my life for days back home. 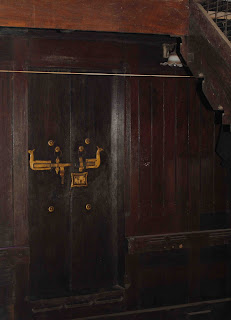 The traditional lamps that are no longer lit stands as an object of interior decoration. The wooden callers too stand as an object of decoration. Back in the olden days, all the wooden cellars were filled with grains, fruits and coconut oil. These cellars protected the produce from thieves and rodents. (Those were the days when men never made poisons for rodents. They only contained them or tried to live with them!)
*** 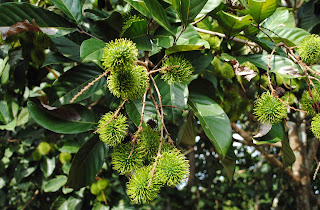 The Rambutan fruit trees at Ayroor are not so ancient. It is said that a friend of my father-in-law brought a sapling of rambutan from Malaya and gave it to him. Then it took root to spread beyond Ayroor. Once ripened the Rambutan turns bright red from green and it is a spiny fruit. These fully loaded trees with bright fruits attract lots of birds and squirrels. 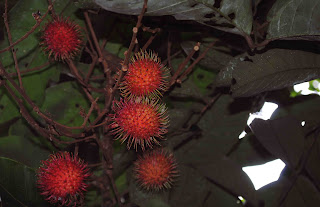 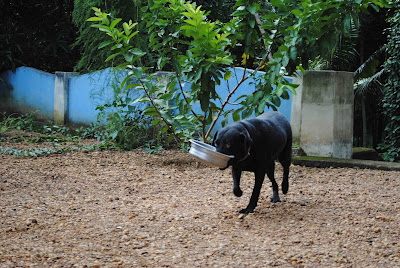 She looked slightly overfed and pampered. Her kennel was a little away from the house. When it was time for feeding, she would pick her feeding-plate on her own and comes running home. 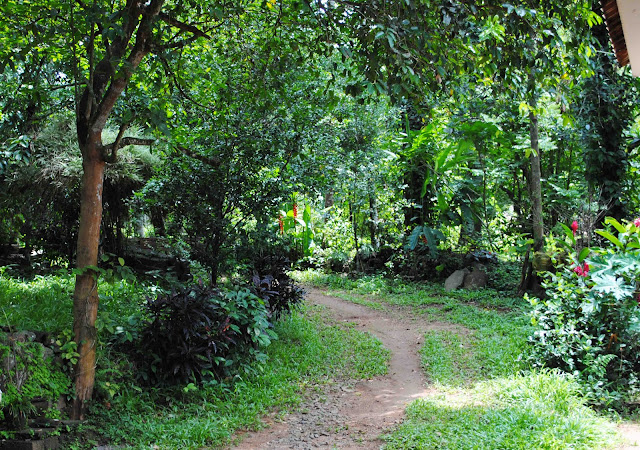 I was the wind last night-
I vaulted the mountains and crossed seven rivers.
And turned aside the tall trees guarding the valley.
I caught glimpses of you through the window.
As I wandered around the little stone house,
They would not let me in; too cold a wind!
I hung around listlessly, afraid to call too loud.
Then like a weary man limped homewards over the sleeping mountains.
When will I learn the secret of stillness?
(Ruskin Bond)
***