The Chain Tree and the BAD BOY stories ...

Everyone has to be lucky at times. 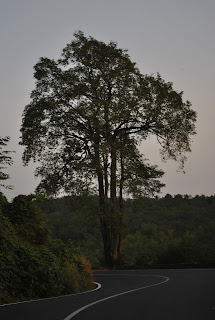 Sometimes life comes like a rain with no sun shining. The week was cluttered with sad and bad news.  I cannot be a recipient of only good news…got to accept all that comes in life: good or bad. The integration of it all makes what I am. When I first heard that a cool spin can de-stress the rider, I never believed. But that’s true. Cycle voyage is indeed a vehicle for de-stressing ourselves. Bad news, sad news, no news…doesn’t matter… A spin makes a difference to it all!

Summer is the peak cycling season. Come weekend, it was time to take the BAD BOY for a spin. Five of us got out.  Spirits were high. My small cycling squad was told about this plan weeks ago: we would do a continuous 60 Km cycling with 13 Km of steep Ghats that include 9 hairpin bends. The sun would warm us above 35 degree and the road was NH 212 Calicut – Bangalore National Highway.

Every time I take these Ghats roads, it offers a different perspective of the world I see. This time, for the first time, together with 4 friends we were attempting this steep road. This is a magical road with luxuriant Reserve Forests abutting the path and the sight of monkeys scavenging the food flung at them by the travellers. Always I had been fascinated by the serenity and beauty of the picturesque plains below. The day being a weekend holiday, the road was relatively loaded with all sorts of travellers. Except for five of us, there were no other cyclists.  I think our bright jerseys and the slim cycles caught the eyes of everyone. 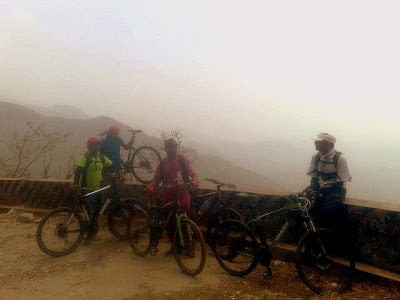 After the fall of Tipu Sultan on March 22, 1792, the entire Malabar was seeded to the British in the famous Sreerangapattanam truce between them. It was at this time, the local King, Kerala Varma Pazhassi Rajah, (a famous, bold and fierce local raja) challenged the supremacy of the British. The menacing guerrilla warfare of Pazhassi was too much for the British and he was driven deep into Wayanad jungles. In the end, on November 30th, 1805, the British could only get the dead Rajah, who killed himself somewhere in the interior of the forest. Thus, Wayanad fell into the hands of the British. In no time, they opened up this rich and virgin plateau for cultivation of tea, coffee and other cash crops. Roads had to be built across the dangerous slopes of Wayanad, from Kozhikode. The large number of Tea and Coffee Estates, and the legendary spice gardens of Malabar and the rich timber wealth of these great virgin forests were too much for the British Empire to ignore. Without developing a road, they would not be able to haul them to Calicut port and to ship them to England. Thus a road was conceptualised. 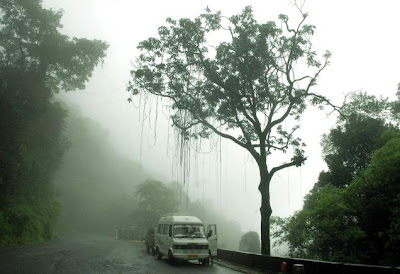 The story tells that the Wayanad Ghats road was first explored for the British by a local tribal. It was a young tribal who convinced the British engineers that a road could be charted across this difficult terrain.

The fluid nature of the hill-soil and the unpredictable  rain water channels during torrential rains on the hills made the British’s job difficult. As this tribal youth knew the nature of the soil and the water paths, he became the guide to the British. The story says that the British, later killed this youth to take the full credit of discovery. But then, the spirit of this youth began to create havoc on the travellers on this road.

Many were afraid to use the road and, it is told, many could not travel on this road to reach their destination on time. Often the spirit would intercept the traveller and confuse him, leaving him frightened to step forward.

The situation became so difficult that a Hindu priest had to chain the soul of this youth to a tree by this roadside. Today, every traveller on this road can see a large Ficus tree bounded by a chain.  This is the famous ‘Chain Tree’ on our track. The ‘Chain Tree’ story visited me as I vigorously peddled across all these hairpin bends.

I call Cannondale Bad Boy a typical Z-category ‘Black Cat’ in her appearance and performance. The moment I took to the saddle of this bike, I could feel a different throb from that of Q5: Bad Boy is smooth, swift and obedient. The character of speed comes with an amazing ability to fully control the wheels under all situations. 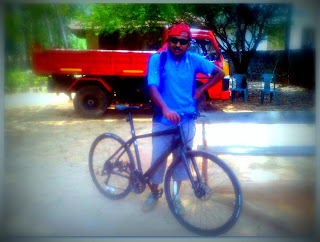 The total bike-weight is less than 12.5 Kg. and it is a bike stripped and clean with only sheer essentials.  The frame (especially with the FATTY fork) looks really fat and bulky… don’t worry!... it is only an illusion. The frame is very light and sturdy in its construction and performance. Look at it and you can appreciate the expertise Cannondale has in working with aluminium. The finish of this frame is great: smooth, starkly clean with no working smudges that is usually characteristic of any other manufactures’ welded frames.  Added to it is the metallic, all-black matt-finish which steals a surprise glance from any street eye-ball. The street first looks at you and your colour…then they keep on gaping at the BAD BOY…they wouldn’t take the eye away from it. There is a delicate sparkling to BAD BOY’s matt-finish which is noticeable to careful eyes.
Even the labels and the graphics on the frame go great with the all-black concept of the bike. The name “CANNONDALE” is itched in aluminium and not painted as in most other manufactures’ frames. The routing of the cables is another feature which is distinct from Q5: not a single cable is routed under the top tube. Everything goes under the down tube. This gives a clean streamline profile for the top tube and is very important as this design helps us to carry the bike on our shoulders (like in a cyclo-cross application).

After the 44 Km smooth highway tarmac with occasional ups and downs, the Ghats began to bite our peddling. The hard part of the ride would be this section. The 13 Km climb that follow is what makes this ride extraordinary. And the blazing sun was burning the tarmac tar. I could smell the scent of this from my saddle. As each of 9 hairpin bends is spread across this long section, it was ideal to take it systematically in super-low gear. Wayanad is a beautiful land. With huge potential for tourism, there has been unplanned development of properties recently. This has made these Ghats road busy.

One trick that I have understood in taking long climbs on cycle is that, I never look towards the elevated horizon far away. If I do so, it frightens me. A mental conversation sets in, “Oh! Is it so long and high??”  And then there is a possibility of giving up the peddling. Instead of that, in every long climb, I glance only at the immediate vicinity of peddling. This prevents me from mentally calibrating the climb. 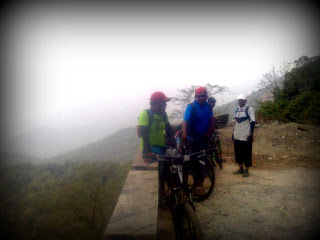 The geometry of Bad Boy is different from Quick-5 and other cycle-frames in the market. While Quick offers an upright riding position, Bad Boy has an aggressive posture for the rider… still, no back pains. The spinning comfort of Bad Boy is remarkable. Weighing less than Quick-5 and with the combination of 700cc slim tires this bike is rightly called the Urban Dark Horse. The disk-brakes give ample allowance to speed across urban terrain in a sporty style. But, on the visibility factor, Quick’s upright riding position looks far superior.Yet,the aggressive posture on Bad Boy is strengthened with the bike’s styling that grabs street-attention. Over all, I would give 4 stars upon 5 for this Black Beauty.

Among five of us, Biju and I reached ahead of others over the Ghats. Up at the end of Ghats stood an empty open Café Day store. It was a welcoming experience for us to cool down. Nibbling chocolate chip cookies with hot cappuccino, it was time for ‘soft cycle talks’ between both of us. Thoughts and words carried us away for a moment. 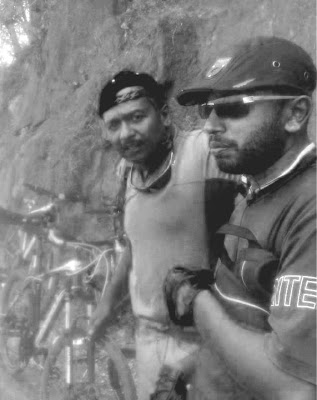 If life is a circle, we cycle around it day in and day out. It is true that we cycled as school children and as young teenagers. But, today, as we browse over a cappuccino, we have walked a long way into our adulthood… into our middle age and still we cycle. But the experience is different… the language of pedaling is different and...times are different. This is the real fun of spinning.


As moment stood noon in that empty Café Day store, no one eavesdropped our whisperings and our laughter. And we moved on...


Time was up and we had to cycle back home. Rolling all the way down and spinning away along the tarmac looked exiting. Yet it involved carful manoeuvring. If climbing Ghats were tiring, spinning down the 13 Km is to be accosted in fun. But safety is important. I found the disk brakes on BAD BOY absolutely fantastic and responsive. The speed with which we could cut through the road-traffic and swing and roll down the Ghats surprised the motorists.  In a non-stop peddling with an empty hydration-pack I zoomed back home. Cyclometer read 127 Km trip distance.

Thanks to Praveen, my fellow cyclist who shared his mobile photos with me for posting in this blog.
****