On February 15th, the Calicut Biker Biju Jacob darted his first lines of communication on Wayanad Biking. Reading them, I was a sceptic. But there are always people who are hopers and doubters in every story. Biju is a hoper, I a doubter. And this made all the difference in this story.
Biju’s idea was simple: invite all the bikers from his Happy Bikers Form of southern Kerala and give them a taste of the northern Kerala’s Wayanad hills.

Malabar has a long history of travellers visiting them:  Ibn Battuta came to Kozhikode two centuries before Vasco da Gama made it… and then, now, it is the turn of Happy Bikers from south Kerala to conquer the Malabar hills. 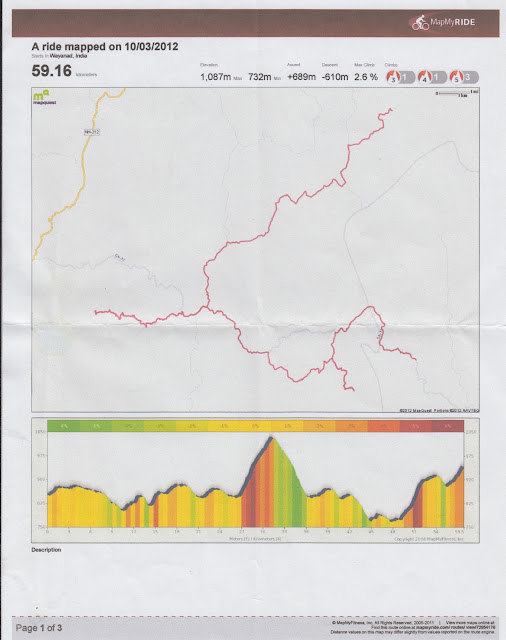 The plan was thus: all would reach Calicut on 9th Friday, March.  After two days of spinning and trekking on the Wayanad hills, they would return on 11th Sunday.  Alleppy Bikers had to coordinate with Sunil John and Ernakulum Bikers had to fix up their plans with Jose Palathinkal.  Jan and Christel (bikers from Belgium) would also join us for all the events. The plan worked.  14 bikers pulled together at a tranquil tea-garden resort called Meenmutty Heights  on 9th evening.  We unwound ourselves. Next day was the spin and we needed rest today. Had food and repose … went to bed with lots of dreams of happy biking. 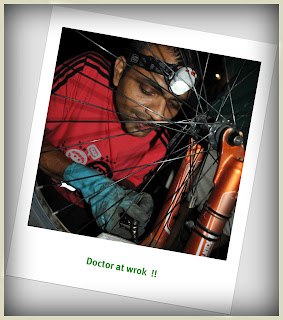 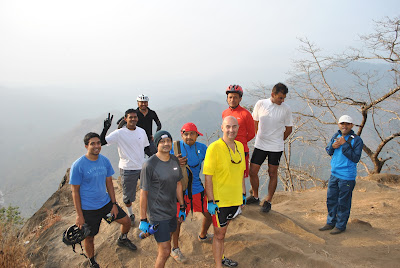 Sunrise Valley …
10th, early in the misty morning, after a pre-ride coffee, we rolled off to Sunrise Valley. Spinning across morning tarmac, it was mostly empty. But, the smooth spin was soon surpassed by the typical off road and semi-tarmac sections in the track. For the first time, I realized that the wheels on my hybrid have lots and lots of limitations when it came to controlling the bike at steep downhill tracks. In one of the slopes, at around 51 KMH, I almost lost control and came to a screeching halt. Frightened, I was shivering. I could see some of my friends on MTBs, in wide wheels, negotiating this steep with confidence. 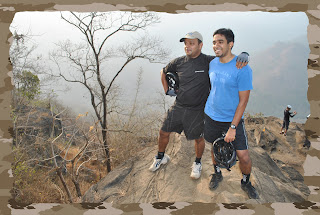 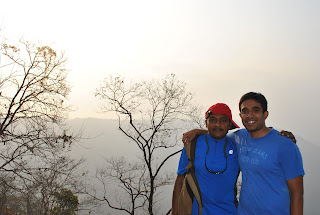 Sunrise Valley is a sleeping beauty of Wayanad. From here, we see the river Chiliyar in her infancy and the Meenmutty falls. The mesmerising gorge is a stunning sight to grasp. While resting, some bikers suddenly became ‘thinkers’. (I am sure they were resting in the pretext of ‘thinking’! or were they talking to the hills? Or were they thinking about the lost business opportunity at home?)  Then, it was most welcoming for a local roadside store to offer us chill butter milk. This quenched our thirst on the first leg of the ride. 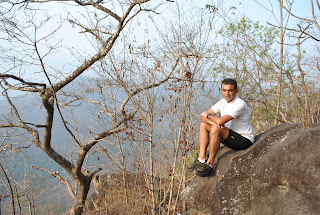 The Chembra Peak …
To spin from Sunrise Valley to Chembra was a typical Wayanad experience. The one important factor in spinning on these terrains is that we encounter endless nasty steeps followed by equally troubling slopes. But there is a beauty in this track : we spin deep through tea gardens and the sight it offer is music to eyes. 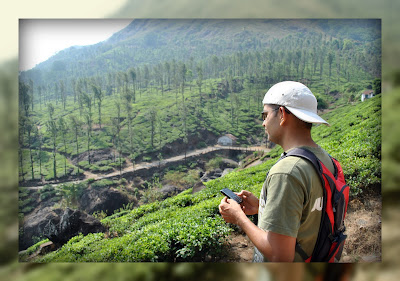 And, when the tarmac is steep, poor and when it is littered with pot holes, things are really bad. We go changing gears for every minute of peddling. The spin would become efficient only then. Those who didn’t like that kind of a riding methodology would lose all the steam faster than others. In fact, these are the trails that exhaust both the rider and his machine to the very limits. 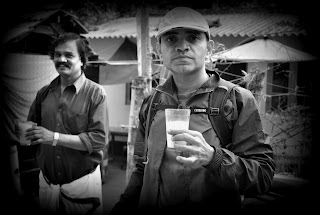 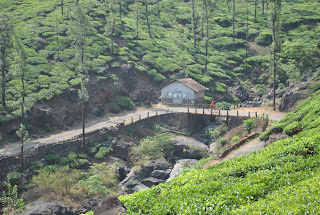 My bike being a rigid Hybrid had her own limitations: she put-up lots of violent shudders that shook brains out of my skull ! That also gave me a realization that spinning is all about an excellent partnership between our mind and machine. If any one of them doesn’t cooperate well with the other, then spinning quickly become a monotonous exercise of joyless pedalling.

At 6,900 ft. above sea level, Chembra Peak is the highest peak in Wayanad. All the bikers made it to the foot of the peak. This is the base where the motorway ends and the trekking begins. At the foot of the peak, our back-up team was ready with plenty of water, fruit juices, cakes and apples. 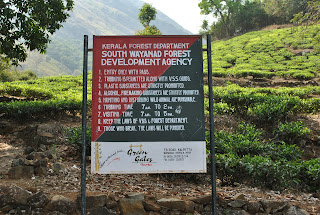 Exhausted, most of the bikes gorged into the cakes and the
apples. (They say, early birds get worms… here at the foot of Chembra, things stood different, the early birds did get the best baked fruit cakes, leaving the worms for the rest!)

Because of exhaustion, not everyone was in a mood to trek up. And hence, some of us alone decided to trek while others rested. All the bikes were safely kept in a shed and we began to climb up Chembra.
Half-way to Chembra, there is a romantic heart-shaped lake and is an important attraction. It is believed that this hill-lake has never dried up. Seeing this lake, I really wondered as to how a ‘heart’ took shape upon this hill. Having reached this lake, we decided to take couple of photos and rest for a while.


As there was lots of cycling left for the day, we had to commence trekking down without much or resting.   We wanted to save the rest of the day and energy for spinning. If we had continued trekking further up, we would have tired ourselves to the point of exhaustion and wouldn’t be able to spin. 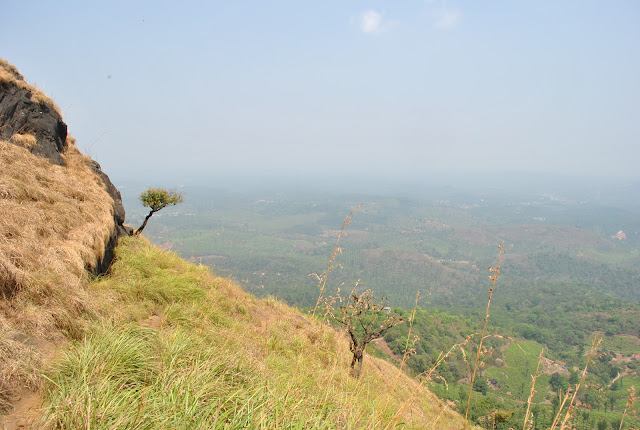 The Edakkal Caves… When we commenced spinning from Chembra to Edakkal Caves, it was noon and the sun was blazing. This was too much for most of the young bikers. The route that we would be doing will be via Karapuzha Reservoir … and that too was no simple task.  Though it is tarmac, with half a dozen classic climbs to accost, this path was really tough for me after the trek. The steepness of the roads would give any cyclist a tough job to pump up his bike. By this time, I saw many cyclists giving up. 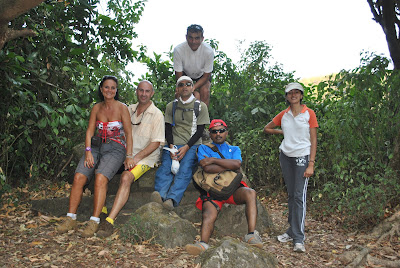 They loaded their bikes on the back-up truck and had decided to travel back in the truck. The exhaustion, muscle cramps and the heat were too much for them to do a recreational cycling. I could count only 6 or 7 bikers, including me, left for the last part of the trail.I think muscle cramps are all about failing to hydrate and about adding fuel (food) before a long ride.Each cyclist must know his body and must learn to hydrate oneself before a long distance ride. 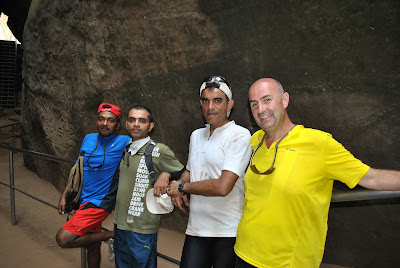 Edakkal caves are a group of rocky cliffs where ancient pictorial writings were discovered The cave itself is believed to have formed 30,000 years ago, after an earthquake rolled out a huge rock that got entrapped between two other rocks to form a cliff. Inside the caves are pictorial writings from the Neolithic man, indicating the presence of a prehistoric civilization of settlement in this region. The Stone Age carvings of Edakkal are very rare and the oldest of them is dated to 8000 BC. They are the only known examples of petroglyphs in South India.
For cyclists, after a hot and gruelling spin, Edakkal Caves offered cool and refreshing moments. We kept our bikes at the foot of the Caves and did a small climb on to the Caves. Inside the caves, the air was chill and windy. There was also plenty of natural light. Standing in those caves, we were all respecting the home of our ancient ancestors: our forefathers who braved all the difficulties of nature to live and fellowship in these caves. 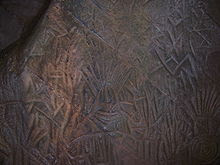 They scribbled their love, freedom and joy on these rocky walls to give us a proud glimpse into our heritage on this part of earth. Suddenly, I realised that we are only custodians of the mother earth for a little while, and that we had to leave a rich legacy to our children. 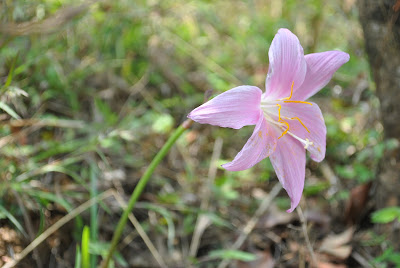 As we left Edakkal caves, we met a God-sent tender-coconut seller. Engineered by God, I think, tender coconut water is the best that can quench a cyclist’s thirst. This is ‘God’s own Country’ and we have it all! After a tasty and cool coconut experience, it was time for the last leg of the spin. 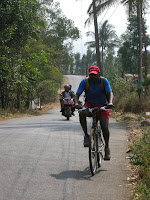 From Edakkal, cycling back to Meenmutty Heights was still a tiresome business. 8 KM into spinning, we were dehydrated and ran short of water. But, it was the spirit and the joy of riding that kept us on to our saddles. 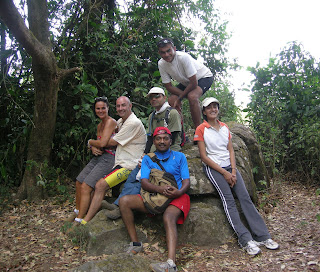 After doing another brisk 17 km on tarmac, we forced our way into Meenmutty Heights resort.  My cyclometer showed a total trip distance of  83 KM…this include something that cyclometer never recorded : an intermediate trek to Wayanad’s highest peak, the Chembra Peak.  Putting both of it together , the effort that I took to complete the trail was far too demanding than any other trails I had done so far.   Unlike doing a century spin on a tarmac, the diverse skill and effort that is required to spin across hills, valleys, off-tracks and added to all that , a moderate trek to a peak were exiting.

In the evening, at the resort, we all had a sense of achievement. What was more important was the self-analysis that we had miles to go and promises to keep and that there are years to spin around (if God wills)! 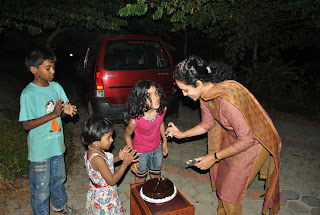 The Ernakulum bikers were planning to leave home. In fact, I found them having loaded their bikes on to the bike-carrier of their MUV. But Biju had more surprises for us: Ditu was going to cut her Birthday cake. After a tiring day, what a joy it was to taste the cool chocolate-rich almond cakes! … and that too a surprise!! Everyone wanted to thank Biju for his excellent arrangements and his planning in making this memorable day. 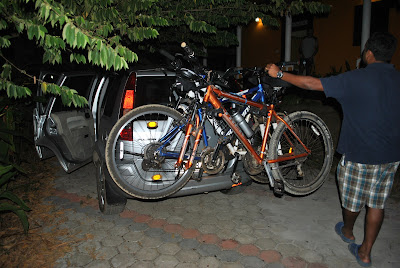 But then, it was time for the Ernakulum team to go home. They were the first batch to come to the resort and they were the first to leave home.
By Sunday 11th, many had left home. Sunil announced that he wasn’t going to touch his cycle on Sunday. He wanted to save Sunday for something different: a swim in a chill-pool deep in the forest. All of us too decided to follow Sunil. We packed off from the resort, loaded our bikes on our cars and made it to Biju’s cardamom plantation surrounded by the Reserve Forest. 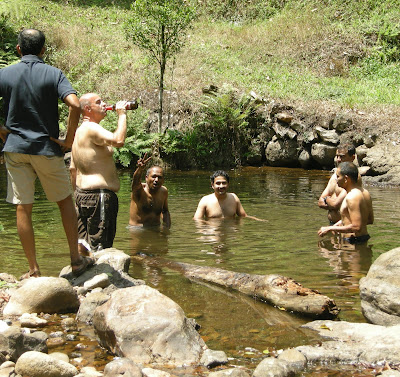 This last stint of cooling-off was indeed great: all the exhaustion of the previous day’s spinning was washed off … a new vigour was added… and we left Wayanad for our homes bidding goodbye to all.