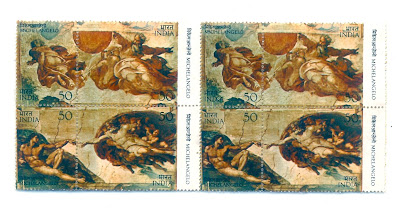 Each time 'creation’ is discussed, there is always a thought of God making material out of nothingness. This thought is fair because, every human as a child, begins to visualize creation as the work of God. It is only later that he exposes his beliefs to the rational world that calls for many other explanations for Creation.

Beyond concentrating on the very act of creation, I move further away to the consequences of creation. One of the most exiting prospects of the creation story is that we can keep ‘in-touch’ with God. If I put it in another way: I cannot run away from the Creator nor the creation. Each time we review the creation with all our wisdom, it strengthens our ‘in-touch’ relationship with the Master of the Universe. The mystic, the learned or even a poor illiterate on the street experience this bond very strong in their lives.

As a child, I used to play around with toy cars. In these toys, a key was used to wind-up a mechanical spring and once left on the floor would race across the room. The fact is, once I put down the wound-up toy, it would just rush away anywhere it likes. There wasn’t any control on them! However, I think creation is not like that. The creator and the creation have an intimate communion, a connection and a relation. As the ‘touch’ of the Master is reflected in every bit of the universe, the story of creation stays alive and ticking.

The story of creation would have been different if this ‘in-touch’ relation was missing in its very heart. Like a mechanical toy with no controls, I would be rushing across my floor...banging here and there, sometimes toppling and ultimately stopping cold dead, directionless...life less.

Of the many visualisations of the Creation, Michelangelo’s painting on the ceiling of the Sistine Chapel (Rome) stands apart. Here, the ‘in-touch’ connection in creation is so profound. Michelangelo seems to be telling that the creation would have been a lot poorer if this ‘connection’ was missing. There is another beauty in this painting that keeps talking to me: God and His creation are footed almost on the same level and are seen facing each other (making an eye contact). What a marvellous visualisation!

*** The Stamp: Mint block of four quadruple from my collection. ‘The Creation’ of Michelangelo was issued as a commemorative stamp in 1975 to celebrate the quincentenary of the painter. This is the first quadruple stamp ever issued by the Government of India. Dr. Shankar Dayal Sharma, the then Union Communications Minister who released this beautiful and unique stamp described this masterpiece as a “superb, aesthetic expressions through the medium of human body". "Michelangelo proves that there is something that unites the whole of humanity” he added***