Tellicherry is a small town north of Calicut. For the foreigners who colonized this part of Kerala, this town was favorite. Early 17th century, the French came to Tellicherry and took complete control of Mahe, an area 5 Km south of Tellicherry. They developed it into a major port, which soon became very popular in the Continent. The British came late in 17th century and got a strong grip on Tellicherry with the help of the local Raja. They established a factory in 1708. Many of Raja’s family members who later attacked the factory causing a major setback for the British, challenged this action. 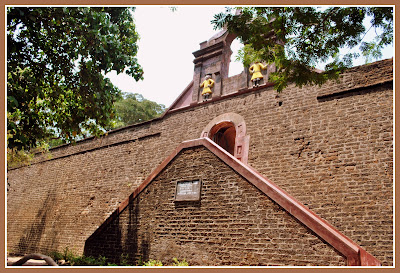 It was at that time, the British contemplated a military centre at Tellicherry. Added to it, the strong military presence of the French at Mahe was an irritation for the British who vied for the rich spice trading centers of Malabar. Finally, in 1725, the British East India Company decided to build a fort and protect the trade routes, which they feared, otherwise would fall in French hands. With the blessings of the local Kolathiri Raja, the British soon began to build a fort on the strategic hills adjacent to the sea. By the end of 1776, the British had a very strong military presence at Tellichery, the Fort being the headquarters. When the British finally left after the Independence, the Archeological Survey of India took up this fort. Since then, it is maintained as a National Monument. 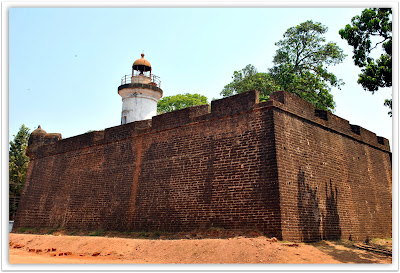 This is a square Fort with massive walls. The entire structure was built in the typical Malabar laterite stones. Inside the Fort is a war room, prison and secret tunnels to the sea (the escape route). There are huge ramparts with cannon holes and a lighthouse. Altogether, this Fort is an imposing structure. Looking at it today and walking through the length and breadth of its ramparts, I graciously read history, which molded the future of Malabar and the British Raj in Kerala.  Though I have travelled a lot through Tellicherry, I had never visited this simple fort. Somehow, I had missed it! On this Vishu day, when the world was busy celebrating the Malayalam New Year, two of my friends and I decided to spin across Calicut and reach Tellicherry Fort. 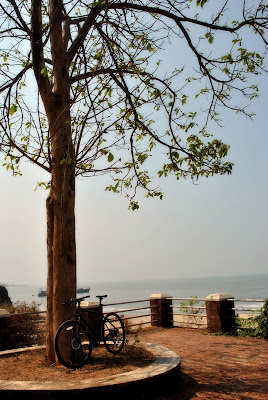 From Calicut, the distance stood 72 Km to reach the Fort. The terrain was 100% rolling tarmac. After all these years, the Government’s public road authorities have constructed only a small section (around 30 Km) of this terrain in perfect flat topography. The summer was at its best and I knew that hydration would be a major factor for this ride. With most shops closed on Vishu, replenishing the water would be a small trouble that we were to face.  Having fully loaded the hydration pack we were all set out to Tellichery at 6:30AM.
Adjacent to the Fort, the British had build a small Church and a Cemetery. When they left India, the Archeological Survey of India took over the Fort and declared it a National Monument. The Church was shut down and was ruined. The local Christian community was not interested in that property and for years, it laid like a hunted structure.
In 2009, Government of Kerala took up the restoration of this property siting the heritage value of the same.  Thanks to the then Leftist Government, with the restoration complete, this is one of the most tranquil and serene area I love to visit often. 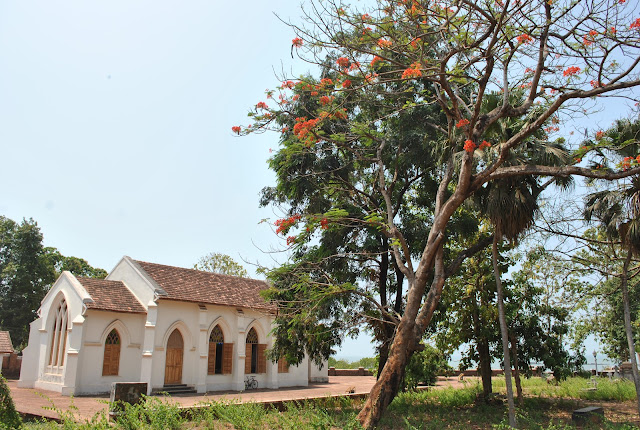 The location of this Church is unique as the beach and the sea forms the backdrop scenery from the Church’s Altar. This is the only churches I know, which has such a scenic beauty in this part of Kerala. The Church’s architecture is typical Gothic and English.  With series of Gothic arches wherever we look, it is an absolute delight.  Inside the church, with the constant cool breeze from the open sea, there is no requirement for electric fans.  The vast beach and the distant rock formations add to the scenery of the location. There is also a small English Cemetery adjacent to the Church.  Peculiar shapes of the headstones in this Cemetery are a major attraction to the historians. This is the only Cemetery where such diverse shaped headstones are seen. The famous English philanthropist and educationalist Edward Brennen, who had made Thalassery his home and who founded one of the oldest educational institutions of Kerala, the Brennen College (in 1862),  is laid to rest in this Cemetery. It is believed that the British Commander who led the battle and plotted the final fall of the Pazhassi Raj is also laid to rest here.  It is said that after the victorious battle against Pazhassi, this British military Commander refused to go back to England, making Thalassery his hometown and preferred to be laid to rest here.

Spinning on a holiday got its advantages and disadvantages. Holiday takes away lots of traffic and crowd from the National Highways. The main disadvantage is that the cyclists have to fear drunken drivers on the roads. With drunken drivers proliferating, this is major cause of concern on Kerala roads.  However, we peddled at an average pace of around 28 KMP. On reaching 30 km, both fellow cyclists decided to return home for the Vishu luncheon that they would not want to miss. So, they turned home… and I decided to make the rest of the journey solo.

Cycling to Tellichery Fort was a synergy of 3S :

I carried 3L water, 1.5 KG camera + accessories, multi tool with tire levers, pre-glued puncher patches, hand pump, the breakfast (peanut butter spreads) and the first-aid. Hauling all these were another troubling point in the spin. The weight of all this put together was not comfortable for an easy spin. Yet, when you do something you love, you don’t realize the pain in it…, and I was spinning. Yet, I would always advise any solo cyclist that he must never attempt to spin without carrying all the essentials. We can never ever depend on the locals for our way of getting things done.
At 12:15 noon, it was time to hurry back home. The 72 Km of spinning back solo was the toughest, simply for the fact that I was all alone. Hydration pack was almost empty and the blazing heat of the Sun was slowing me down. I decided that I would spin slow. My average pace fell to 23 KMP. But it was OK. For me, as a solo cyclist, a safe and sound journey was more important than speed. As I reached home at 3:30 PM,I quietly enjoyed a cool bowl of watermelon and called 'The Solo-144'  a day in my life !
***
P.S : '144' because, it was 72 KM X 2  spin
Posted by just as I am at 1:18 PM

Nice description about Tellicherry. I did visit the premises of the old church onch and the place around it - 'Folly', I think. This small town always reminds me of the famous 'Thalassery biriyani' and 'barnacles' (njavanikka) I used to have when I attended a 22 day Refresher course at Palayad, University Centre.

I WAS THERE WITH THE ST. MARY'S CHURCH CHOIR DURING THE RE-DEDICATION CEREMONY. ALMOST A REPLICA OF ENGLISH VILLAGE CHURCHES. A VERY NICE WRITE-UP AND NICE PHOTOS.