"Be Still and Know that I am God!" 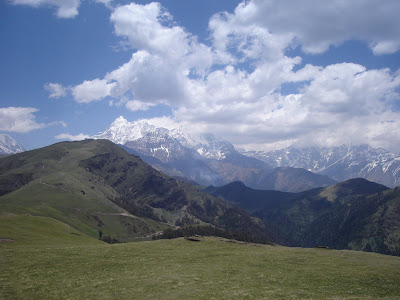 We continue climbing the narrow tracks...the steep paths of Himalaya are akin to the steep paths of life itself. There has been always tendency for me to ask our guide, Mr. Narandrabhi if further climbs were tougher ahead. He would never tell me so. It was the beauty in that man to encourage me although the trek. He would always tell me, “Take small steps, breathe deeply and climb. You will make it.” However, more than a physical effort, I believe, it was God luring me on to the mountains.
Trekking to Roopkund was pleasant because there was a strong spiritual element to it. I always believed that the mountains were flushed with beauty that belonged, not to them, but to God. The journey was a poetic symbol and was a divine reality.
But what is the sole purpose of a solitude? I had to have an answer for that question. Why cut adrift from the daily generality and go uphill to Himalayas? I could not find an answer for that when I stared the journey. Only as the trek unfolded that I began to understand that some part of me really belonged to the Himalayan solitude. A strange kind of patriotism too emerged together with that feeling. I was awed about the little steps I took because I stood so small among the grand chain of the great Himalayan ridges. The air being sweet and cool, I lavishly breathed deep to speak to myself the glory of the eternal God. I was careful not to rush restlessly about and miss the beauty and serenity of His creation. The Holy Bible says, “Be still and know that I am God!” That is true as I tranquillized my mind on Himalayas... as I stood still for the presence of God on those mountain ridges. In the upper Himalayas, as the great mountains ridges looked at me,... as it flooded me with the stillness and utter placidity, the words from the Bible , ‘... to know I am God!’, rang deep in me.
Really speaking, I never went to Himalayas as an adventurer... ... nor as an explorer or as a researcher. It was more to cease my external activity and witness the brilliant surroundings of 'God made Himalayas'.
If Nature is our tutor who teaches us to be still, then 15500 ft. up in Himalayas has a great story to tell anyone who becomes a part of it.
****
Photo Location : Meadows on the way to Roopkund
****
Posted by just as I am at 6:00 AM