A picnic on cycle to a remote beach is always fun. Friend and me picked up our cycling gear and peddled to Kadalundi Bird Sanctuary.  A cool 65 Km ride along some beautiful beaches of Malabar and the cool coconut countryside. 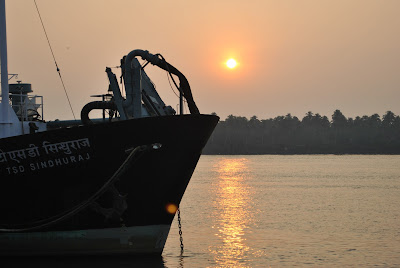 It was early in the morning. The sea was cool. It looked as if Sun was taking her own time to pop up. We peddle straight to the Baypore Fishing Harbor. That was the dead end of the road. The fishing trawlers were pulling out for another catch of the day. Golden hue sun filled everywhere.  We stopped at the dead-end of the harbor road to load cycles on to the ferry.  We saw people a little taken aback seeing the bright colors of our cycling jersey and the strange headgear.  Some of them were more curious about the bike and the ‘complicated’ chain drive. “Where are you from?”, and “Why are you here?” were the other common questions. We had to talk to them all. Though every cyclist need to be left alone, part of the cycling is all about people: without them, cycling world would be strangely empty! 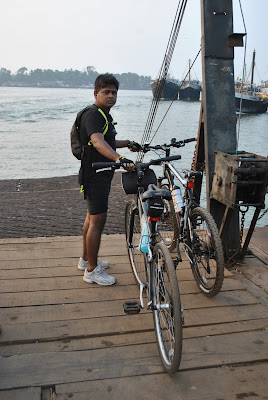 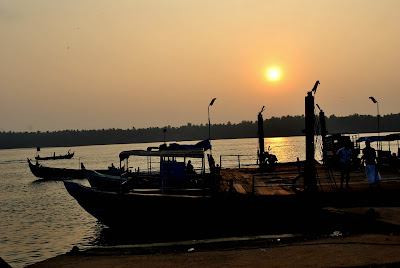 Isn’t it human to think of ‘I’ more than any other word in the dictionary?  I want to be the first to reach the mount Everest, first to round the world …., first to swim the English channel and first to reach the moon. Given a change, I like to inaugurate something strange with my little life. On the ferry, friend and I had a similar feeling that we were about to accomplish something strange with our bicycles. One thing for sure, we both were accomplishing the maiden ferrying of our ‘Cannondale’ and ‘Trek’ over a country boat across a Malabar estuary,  for the first time. In addition to all that, we enjoyed every bit of the river crossing. 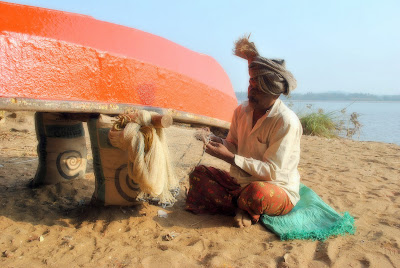 The Kadulandi Bird Sanctuary is famous for more than 60 species of migratory birds. This bird sanctuary is spread over a cluster of islands and we decided to cycle to couple of them. The scenic beauty of the place is enchanting. Cocooned by the red laterite hill rocks surrounding the Kadulandi river, I quickly realized that it is my ‘God’s Own Country’ and there is no doubt about it! The red laterite hill rocks are very hard and they guard the mouth of the river estuary. 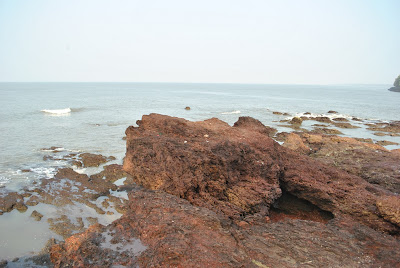 These laterite stones were so popular that even the Dutch, the British and the Tipu Sultan of Mysore quarried them to build forts and roads. Even today we can see some of those laterite civil structures in Malabar.  Nevertheless, the Bird Sanctuary did surprise both of us: there was not a single bird to be found!  The local anglers informed us that this was not the time of the year when migratory birds would home-in. I could see some native seagulls scavenging fish near some fishing boats. But for that, there were no birds.  We understood that it was ok for cyclists not to chase after birds. Hence, we proceed to cycle further deep into the sandy coconut lagoons and the countryside. Cycling further down to the river mouth, we reached the edge of the land. We stood separating sea and the shore. What a splendid view it was!  Like a romancing lass, the surf and sound of the waves rolled all around us. I kept listening to it more and more. Then I felt our cycles enjoying the fun… I believe the cycles too have a heart and a soul! Not wanting to wet their wheels, we stood still a safe distance away. The joy of the cool salty-breeze kissed us all over! In the 1997 American epic romance blockbuster 'Titanic', I remember a famous posture of Leonardo DiCaprio and Kate Winslet holding each other at the top deck of the Titanic. This posture was the icon of the film. Kate Winslet was holding her hands in a ‘T’. Our Cycles too stood romantically at the edge of the cliff, holding her ‘hands’ like a ‘T’! 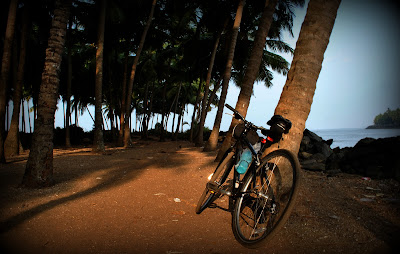 Peddling back home was through the lonely tarmac roads.  From Calicut University campus to Calicut city, the roads are all a mixture of State highways and National highways. Kerala is blessed with lots of these roads bearing notorious elevations and steep slopes. In every manner, these tarmac roads offer no easy peddling.  But Hai, How is it that every road-elevation always rewards cyclists with an equivalent cooling slope? That has kept me thinking a lot! 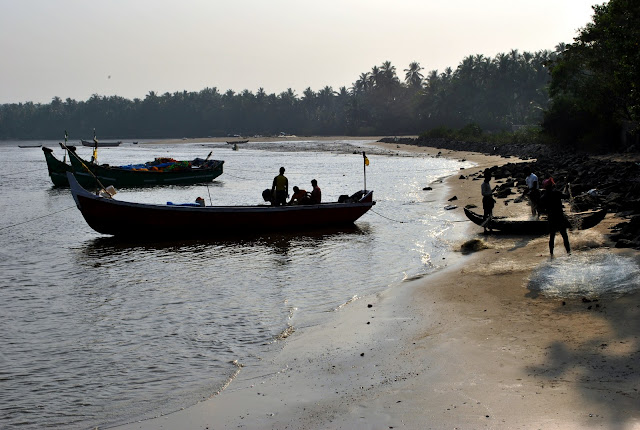 As I was approaching the city, a motorists came by me and asked, “Do you carry a message for us as you cycle?” , “Why do you need a message?” I told him, “ Cycling is the only message we have for you.”

*** Photo Locations:
Baypore Fishing Harbor and
Kadalundi Bird Sanctuary
near Kozhikode.
Posted by just as I am at 7:02 PM

Thanks Aby for the trip that I also undertook along with you, by reading your blog. It was indeed a mesmerizing journey
Prem - www.premclt.com

Nice read....and I always like how you incorporate the bike into the photograph...the bike somehow feels a part of the pictures rather than just a prop...keep it up